Research in Lay Terms
Our research is focused on understanding the mechanisms that control adaptive immune tolerance to self. We are concerned primarily with T cells, and how these immune cells normally avoid reaction against self tissues. We are curious about the interaction between T cells and neural stem cells, with an interest in developing approaches to treat autoimmune diseases of the brain such as multiple sclerosis.

Detail on Research
Our research focuses on the role apoptotic signal transduction plays in the development, activation and homeostasis of the immune system. Our current interests include the study of death-receptors and the regulation of T cell activation. In order to study the role of death-receptor induced apoptosis in T cells, we have generated mice that express inhibitors of certain apoptotic pathways. One line of mice expresses a dominant-negative form of an adapter molecule known as FADD. This adapter protein is involved in activating caspases, cysteine proteases that initiate and execute the death program during apoptosis. Although certain forms of apoptosis are blocked, these and other lines of transgenic mice have provided evidence that multiple apoptotic pathways exist in T cells that are activated during different stages of differentiation. Interestingly, we have found that FADD mutant T cells have defective proliferative responses to normal mitogenic stimulation. Thus, a major focus has been to elucidate the biochemical basis for this proliferative defect. These paradoxical results suggest that T cells utilize similar signal transduction pathways to initiate proliferation and apoptosis and provide a framework for elucidating the homeostatic regulation of T cells that is crucial for a functional immune system. A second area of investigation regards the signal transduction pathways that regulate the elimination of autoreactive T cells during thymocyte differentiation, a developmental process known as negative selection. Since this stage is thought to involve apoptosis, we are investigating apoptotic pathways that might contribute to this process. More recently, we have extended our focus to the mechanisms that prevent self-recognition in the peripheral immune system as well. This work is of high significance to our understanding of immunological tolerance, the means by which the adaptive immune system avoids self-recognition and autoimmunity. During the course of this research, we have identified a novel serine-threonine kinase called DRAK2 that is differentially regulated during thymocyte development. We have found that this kinase plays a role in regulating thymocyte development and alters the signaling threshold in peripheral T cells. Despite hyper-responsive T cells, mice with an engineered deficiency in DRAK2 are enigmatically resistant to spontaneous and induced autoimmune diseases. Although the specific function of this kinase is unclear, our lab is currently investigating the role of this kinase in T cell development and activation. Ultimately, our objective is to investigate the paradigms that regulate immune homeostasis through the study of the intersection of apoptotic and growth regulatory pathways.A third area of investigation is on the interaction between T cells and neural stem cells, with the hypothesis that T cell tolerance is essential for the successful transplantation of stem cell derivatives. Our work focuses on both viral- and myelin antigen-induced models of multiple sclerosis (MS), and seeks to define specific strategies to promote immune tolerance to stem cell derivatives following transplantation to treat MS.

Favorite Quote
ʺ...But this one goes to eleven!ʺ 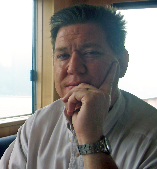